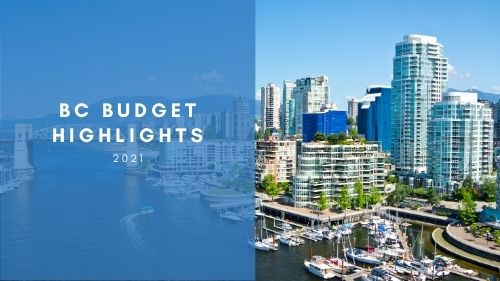 On April 20, 2021, the B.C. Minister of Finance announced the 2021 budget. We have highlighted the most important things you need to know.

Requirement to repay B.C Emergency Benefit for Workers has been waived

If you are self-employed and received the B.C. Emergency Benefit for Workers, you will no longer be required to repay this benefit if you would have qualified for it based on your gross income (instead of your net income). This mirrors a federal change to the Canada Emergency Response Benefit.

The budget confirmed a previously announced increase to the Home Owner Grant to $1.625 million (from $1.525 million) for the 2021 tax year. This grant helps reduce the amount of property taxes you pay.

The provincial sales tax refund for motor vehicles purchased and resold within seven days has been eliminated. This elimination will apply on a date still to be set by regulation.

The budget increases the tax rate on tobacco products as of July 1, 2021:

Changes to the speculation and vacancy tax

Corporations owned by government agents are now exempt from the speculation and vacancy tax.

Also, the following changes have been made and are retroactive to November 27, 2018:

We can help you assess the impact of tax changes in this year’s budget on your finances or business. Give us a call today!